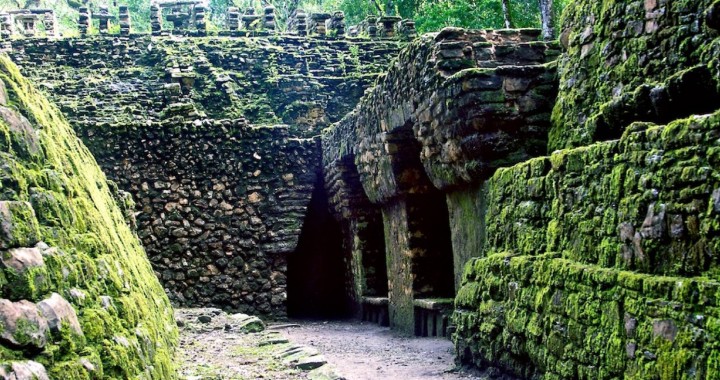 This amazing site is worth visiting just for its spectacular setting, in the heart of the Lacandon Rainforest, on the banks of the wild Usumacinta River and is relatively close to Bonampak, another Mayan site, famous for its coloured murals. To reach the ruins you have to take a boat from the Chol Indian village of  Frontera Corozal which is on the border with Guatemala. Your boat will travel downstream for 30 minutes along the Usumacinta River which winds through dense rainforest. If you are lucky you may observe the flashing iridescent colours of toucans, scarlet macaws or parrots, as well as crocodiles, neotropical river otters and spider monkeys. Once disembarking, a short walk through the jungle will lead you to the ruins, still surrounded by the jungle that covered them once this important Mayan city was abandoned. Yaxchilan was a rival with the city of Palenque with which it warred in 654. Mayan rulers  of Yaxchilan included Moon Skull, Bird Jaguar I and II and Yax Deer-Antler Skull.

The site contains imposing ruins, with palaces and temples adjoining a large plaza upon a terrace above the Usumacinta River. The ruins are encircled by a natural meander in the river, overlooking both the river itself and the lowlands beyond.  Yaxchilan is known for its large quantity of excellent sculpture, such as the striking monolithic carved stelae and the narrative stone reliefs carved on lintels over the temple doorways.  Over 120 inscriptions have been identified on the various monuments from the site.