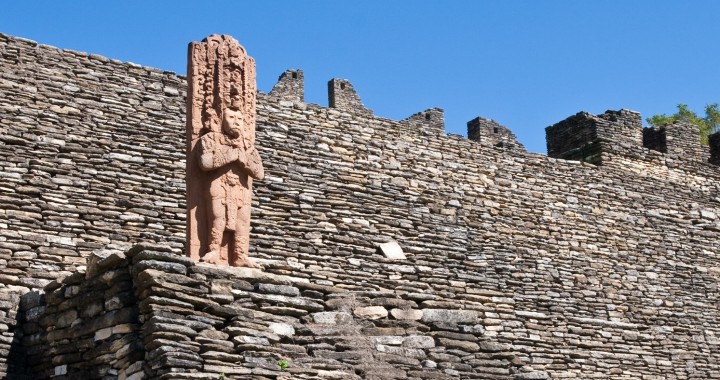 The archaeological site of Tonina is just 2 hours from San Cristobal, close to the city of Ocosingo. The majority of this site was excavated only relatively recently during the 70s 80s and 90s. The principal structure, the acropolis, rises over 70 metres above the main plaza and is one of the highest structures in the Mayan world. The outstanding feature at Tonina is also on the acropolis, detailing  the ruthless manner in which the city dealt with its enemies. A 16 by 4 metres (52 by 13 ft) stucco sculpture depicts a skeletal death god carrying the decapitated head of a lord of Palenque in one hand.

The city is notable for having the last known Long Count date on any Maya monument, marking the end of the Classic Maya period in AD 909. Toniná was a violent  state in the Late Classic, using warfare to develop a powerful kingdom. For most of its history, Toniná was engaged in sporadic warfare with Palenque, its greatest rival and the most powerful political territory   in the west of the Maya region, although Toniná eventually became the dominant city in the west.

This Mayan city is also notable for having the last known Long Count date on any Maya monument, marking the end of the Classic Maya period in AD 909.

Other Mayan sites that are worth visiting include Bonampak, in the Lacandon Rainforest, and Chinkultic, a spectacular Mayan temple perched above a deep blue cenote. The latter near Comitan can form part of a day trip that includes the beautiful Los Lagos de Montebello lakes.