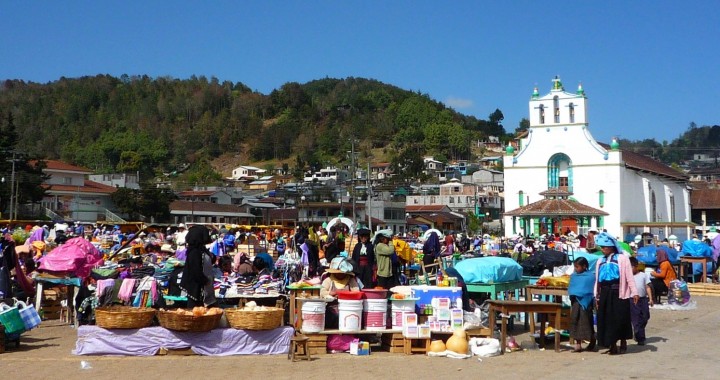 The larger and recently more “modern” San Juan Chamula is worth visiting just to experience the interior of the small church in the main square. Entering the church is a religious/spiritual encounter that you will never forget. It is best that you experience this sacred space in your own way without researching before visiting. Both thriving Mayan and Christian beliefs intertwine in ceremonies and traditions that are rooted in timeless millennia.  It is worth taking an Indian guide into the church and please DO NOT take a camera or any photos in this area, as local Indian beliefs strictly prohibit this!

The traditional cemetery next to the original church is also worth visiting.

The town has changed significantly over the last 30 years with thatched adobe traditional houses being replaced by many more modern and “American” style houses, partly due to the high number of Chamula Indians that migrate to the US before returning with often different ideas and ambitions. However; the town is still a fascinating example of the amalgamation between two contrasting worlds; the traditional culture of the Tzotzil Indians with a more modern imported capitalist ethos, more than often with profound negative consequences. Due to a combination of factors, including its use in ceremonial activities, the per capita consumption of coca cola in this Indian settlement is one of the highest in the world, resulting in related health problems.