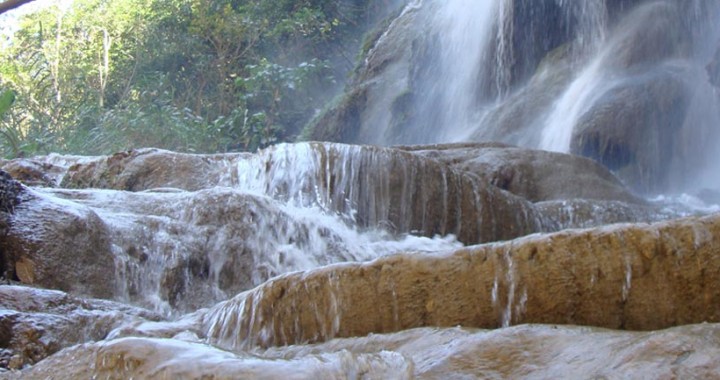 Both of these natural attractions are about 2 hours travelling time from San Cristobal. The first is one of the least visited but most beautiful places in Chiapas, a large waterfall within the Rio La Venta canyon. To get to the river, there is a   pathway down the canyon sides, through semi-deciduous forest.

This attraction is within the El Ocote Biosphere Reserve and species that you may observe are coatis, Neotropical river otters, badgers and ospreys. Enjoy a swim in the clear river water or relax on the small sandy beaches to build up your strength for the 700 steps walk back up to the top of the canyon!

The Sima de Cotorras (Parrot Sinkhole) is a large, deep sinkhole with a small untouched forest at the bottom. It is 160m wide and 140m deep. The sides of the sinkhole and the forest below provide a home to thousands of green parakeets, probably due to the absence of many predators.  The parakeets create a spectacle at dawn, around 5:30–6 am, when they leave the hole en masse, flying in spirals while their cacophonous squawks reverberate throughout the sinkhole. The parrots are most numerous between March and October. There are rustic cabins here, where you can stay the night, thus assuring that you don’t miss this unforgettable sight. The sinkhole is also famous for its ancient wall paintings, believed to have been created by ancestors of the Zoque Indian group between 5,000 and 10,000 years ago. There are 48 paintings which can be observed halfway down the rugged cliff. How and why these people descended 70 metres of sheer cliff to paint the figures on the sinkhole wall still remains a mystery.