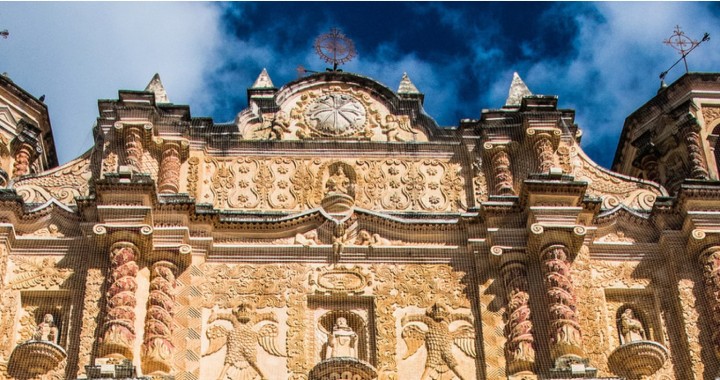 After travelling through the more modern suburbs you will enter what appears to be a completely different city! You are now in the “historic centre”, the oldest part of the city with many parts still as they were when colonial San Cristobal was founded almost 500 years ago during the Spanish conquest. This area maintains its Spanish colonial layout and a large part of its architecture, with charming cobblestone streets, tile roofs, small plazas and balconies often adorned with colourful flowers.

This building is from the 17th century. This arch was once the gateway to this historic city and is now located at the end of the very popular “andador turistico” (pedestrianised tourist walkway). It has a pure Moorish style and it is the only one of its kind in Mexico; therefore, it is often used to represent San Cristobal. The adjacent Carmen Temple is the only remaining part of the La Encarnacion convent, founded in 1597. This church is very rare in that it is one of a few which are L-shaped, running along the west and south sides of the plaza. The church is still used for mass, the harmonious bells are rung and you can often witness flamboyant weddings.

This beautiful cathedral is found next to the lively central square. The outstanding facade was built in 1721. It’s  striking west-facing yellow facade provides a stunning sight when illuminated by the light of the setting sun, emanating a heavenly golden glow against a darkening sky while the large wooden cross in the adjacent Plaza de Paz casts an eye-catching shadow across the front of the cathedral.  You can often see older Mayan-descendant Indian women in the Cathedral, with some even traversing the entire nave on their knees to approach the large image of Jesus above the Baroque altar.

This church is dedicated to the Virgin of Guadalupe, the patron saint of Mexico and is located on the top of a hill to the east of the main square. The walk to the up to the church along Calle Guadalupe (Guadalupe Street) will definitely keep you fit, and you will be rewarded by a spectacular panorama, overlooking a sea of red tile roofs that stretches towards the distant Huitepec volcano.

The Santo Domingo Church and Monastery.

The Santo Domingo Church and Monastery.  The monastery was completed in 1551 by Dominican monks.  The beautiful façade of the Santo Domingo Church is one of the most ornate in the whole of Latin America owing to its stucco work, Inside the church, the wooden carved pulpit is covered in gold leaf.  The first hospital for poor Indians was established in the adjacent La Caridad Temple. The park here is home of one of the largest and most colourful Indian handicraft markets in Latin America.

There are many more important attractions in the centre of the city, including the  attractive Parque Central (Main Square);  the San Francisco, Santa Lucia and San Cristobal churches; Na Balom museum dedicated to support and research of the Mayan Lacandon Indians that still inhabit the Lacandon Rainforest ;  the Amber Museum (Chiapas is one of the few areas in the world where you can find Amber) and the Traditional Mayan Medicine Museum and the Indigenous  Textile/Weaving Museum located inside the Santo Domingo Monastery.